Backstage with her Ex, or Why Louisa George should abandon Medical for ModernTempted 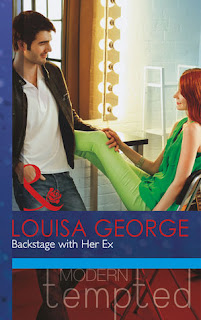 Hiding out in the gents’ toilets backstage is not the way Sasha imagined bumping into her significant ex. Especially when that ex is notoriously damaged, famously wild rock god Nate Munro! She has a massive favour to ask him, but one glimpse of his sinfully dark eyes and all she can think about is that he’s seen her naked!

Nate’s used to women doing anything to get his attention, but he never pictured bubbly schoolteacher Sasha as the groupie type – she’s far too sweet! But when the paparazzi get a hint of their reunion, it’s scandal all the way. Now the question on everyone’s lips is this: In this showdown between the girl next door and rock-and-roll royalty, who’s going to come out on top?

Everyone’s fantasised at one point or another about someone famous (I, for example, had a surreally delicious dream earlier this week in which I went on a date with Nathan Fillion) but very rarely does this ever translate to real life.  Far more common is the concept that everyone knows someone who knows someone who knew a celebrity at school/when they were starting out.  And that’s where Backstage with her Ex comes into its own.

Sasha is a secondary school music teacher who wants to take her show choir to Manchester for a competition so, with a determination that is characteristic of pretty much every teacher I’ve ever worked with, she hunts down her ex-boyfriend (now international rock star) and persuades him to help her raise money.  Of course, there are a number of issues that this brings up, mainly the fact that Nate wants nothing to do with the school in question, plus the emotional history between the two of them.

There are a number of things that I fall in love with when it comes to romance novels: one is a dark brooding hero (check), another is any kind of food description (check check) and finally, any mention or use of Italy as a setting (check check check).  Being half-Italian I was absolutely thrilled when Louisa George moved the action from London – a city where I work and relax – to Tuscany.  She manages to capture the bustle and ambience of a country that I adore brilliantly, and it’s fairly difficult to impress me when it comes to Italian settings!

And in addition to this there’s the twist that Nate realises that he’s in love with her first, and then has to spend a good chunk of the narrative trying to win back her trust once more.  There’s nothing better than a man in touch with his feelings.

This is Louisa George's first #ModernTempted book (she's usually over at Medical), but based on the utter delightfulness of Backstage with her Ex I really hope it's the first of many! 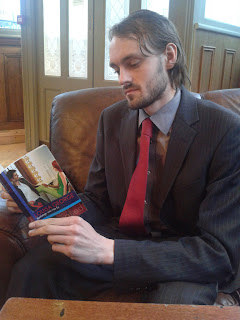 Reaction to Photograph Request:
Wanted to do two sets of photos: one suited up (Jekyll) and one complete with leather jacket and cigarette (Hyde).
Posted by Unknown at 03:44