I've been a big fan of the new ModernTempted imprint since its launch (as can be proven by my monthly ModernTempted day, every 18th), and I'm currently working on a monthly blog/column called Thrills & Swoon:  My Life With Mills & Boon which will be hosted over on the revamp Mills & Boon forums, shortly after their launch.

So when they asked me if I'd like to be involved in #TemptedToWrite, I nearly bit their hands off!

My job is to summarise the question that everyone's been answering online, have a look at how two published Modern Tempted have answered it, and then to announce my own favourite answer - complete with giveaway!

The Modern Tempted hero is a complex creature - he can come in any format, from geek to millionaire, from ex-army to engineer - but there are always three necessities:

We're not talking academically smart (though let's not rule that out), but rather that he's not going to be a chavinistic dick and he's going to have some kind of drive.  On the other hand, he can be a complete idiot about his feelings - but that just makes the Happy Ever After all the more sweet.
Sometimes this isn't always good crazy - there's a very thin line between love and hate and it's highly likely that their clashes may make him want to throttle her at times.  (NB - any guy who'd actually do this is definitely not Modern Tempted hero material; you've either wandered fairly far away from some kinky Spice books, or he's definitely an ex / arsehole)  Nevertheless he is crazy about her.  In a let's-tear-each-other's-clothes-off-and-have-hot-monkey-sex kind of way.
And yes.  He's hot.  Smoking hot.  To the point where you almost spontaneously combust on the train going into work even though you can't see him!  I'd apologies for this, only he's a romance hero, he's allowed to be hot.

Example Number One:  Max in Jessica Hart's Mr (Not Quite) Perfect 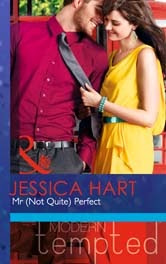 He was still on the sofa, still flicking through channels in search of the news or sport, which was all he ever watched.  Definitely not the kind of guy you would check out in a bar.  Brown hair, ordinary features, steady blue-grey eyes:  there was nothing wrong with him, but nothing special either.

Yep, he was perfect.

Max played rugby so he was pretty fit, but he didn't make anything of himself.  Allegra mentally trimmed his hair and got rid of the polo shirt only to stop, unnerved, when she realised the image of him lying on the sofa bare-chested was quite...startling.

Hastily,she put the shirt back on in her imagination.  Whatever, the man was ripe for a makeover.


What makes Max stand out?  The fact that he's a 'normal guy'.  Hart highlights the fact that men are pressured to be perfect too - sensitive yet manly - but makes Allegra fall for the guy that Max really is, instead of who she's trying to make him be.

Example Number Two:  Blake in Amy Andrews' The Most Expensive Night of Her Life 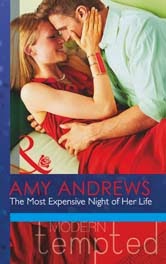 She knew, in the way that women did, that he found her attractive.  And it hadn't been in the way he checked her out, rather in the way he'd avoided checking her out.  Which was just as telling.

And, when she hadn't been miffed by it, she'd admired him for it.

He'd been the consummate professional and that had been a nice change.  A man talking to her as if she had a brain and an opinion that mattered and who dealt with all her little niggles and foibles with patience and efficiency was a rare find.  He hadn't been condescending.  He hadn't humoured her.  He'd been straight up.

And finally...my favourite answer for Round One of #TemptedToWrite is...M. A. Grant!  She'll be getting copies of both Mr (Not So) Perfect and The Most Expensive Night of Her Life.  Here's her fantastic answer:


I’ll put it this way, I’d hate my job if it weren't for Grant Jones.

He may be my boss-from-Hades’s son, but he’s the complete opposite of his father, and every two weeks he visits the office my heart does little flips. It’s hard to believe, but at the young age of 25 Grant is solely responsible for product concepts and launches within Jones & Co. He is smart. And built. Just imagine if that nerdy gamer you knew in school suddenly shot up to over six feet and grew into shoulders that belonged on an athlete.

The best part is he doesn't know how hot he is, so the guy I ogle over my computer screen when he walks in is the real deal. He never wears suits; his “dressed up” consists of casual wool trousers, untucked dress shirts, and sweaters thrown hastily on to protect against the Portland drizzle, along with a wide variety of Converse sneakers. He wears his light brown hair just a bit too long for the business world, forgets to shave on a regular basis, and I’m pretty sure he has a forearm tattoo because I saw something peek out from under his sleeve one day when he’d reached across my desk to grab a pencil.

Then there’s his grin. He doesn't have one of those seductive smiles that some men do. He grins like a little kid, completely unashamed of his own joy, always looking like you caught him in the middle of some practical joke and he wants you to go in on it with him. Basically, if I could start some “Hey girl” memes with his picture, he’d eclipse every celebrity and become an overnight sensation.

And in exactly one hour and twenty minutes, I’ll never see him again.

What makes Grant stand out?  Not only does he sound delicious (I'm a big fan of that suspected forearm tattoo) but he sounds like fun.  And then there's that last sentence - why will she never see him again?  But he sounds so utterly lovely!  Why why why?  Marian, you have your hook.

Join me tomorrow as I take on the next question in #TemptedToWrite!
Unknown at 01:20
Share